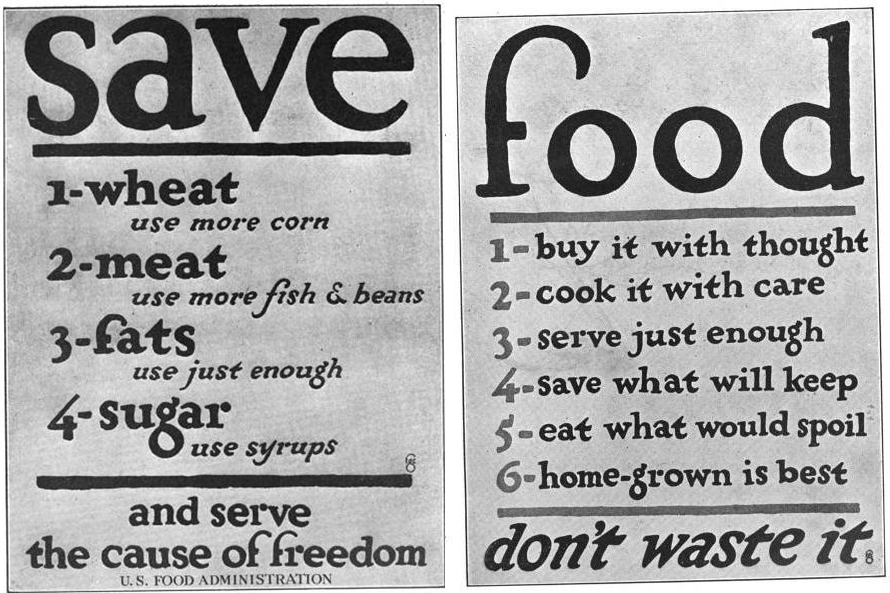 These are cookbooks that our great-great grandmothers would have used 100 years ago. During the Great War, as it was called back then, certain foods were in short supply so the government made an appeal to homemakers across the nation to conserve these foods and to make use of other foods which were more abundant.

America sent a lot of foods overseas to our allies, and also had to keep soldiers well fed. This meant there were fewer foodstuffs available to the American consumer. Rationing was eventually necessary, to make sure that these foods were divided equally among the populace.

The main items in short supply were as follows.

Instead of Wheat, people were encouraged to use rye, corn, barley, rice and potatoes. This caused a rise in price for these products, especially potatoes. Before America joined the war, in 1914, a pound of potatoes could be purchased for 0.019¢, that is less than 2¢ a pound. By 1916, potatoes cost 0.035¢, or 3-1/2¢ per pound. Their price nearly doubled in 2-years. Economy became a necessity for people who had never had reason to consider it previously.

Instead of sugar, people were encouraged to use honey, corn syrup, molasses, sorghum and maple syrup. All meat fats, from beef, pork, chicken and even mutton, were saved and used for frying. Chicken fat was praised for it’s mild flavor and was often used in baked goods, including cake. Deep frying was frowned upon, even when the fat was saved and reused.

The vegetarian movement, which had become increasingly mainstream during the early part of the century, was embraced by even dyed-in-the-wool meat eaters as a form of patriotism. Legumes and pulses, including peas, beans and lentils were an affordable, familiar and nutritious substitute. Cottage cheese and milk were also highlighted for their affordability and high protein content.

Commercially canned goods were rationed because of the tin used in their production. Everyone was encouraged to plant their own Victory Garden. Growing one’s own fruits and vegetables took pressure off of farmers, canneries and distributors as well as freeing up more food to be shipped overseas.

This collection of books is one of my personal favorites. They provide a glimpse into a part of American History that is often overlooked. I find it fascinating to see how our foremothers managed their households with the extra stresses the war provided. It makes my own minor struggles pale by comparison. There are also some tasty and economical recipes, that can still please the palate and the pocketbook today, as well as they did 100 years ago.

American Indian Corn: (maize) a Cheap, Wholesome, and Nutritious Food. 150 Ways to Prepare and Cook it (1917)

The Book of Corn Cookery: One Hundred and Fifty Recipes Showing how to Use this Nutritious Cereal and Live Cheaply and Well (1917)

The Book of Potato Cookery: More Than One Hundred Recipes Suitable for the Tables of Rich and Poor Alike ; Showing how to Prepare Economical and Nutritious Dishes from the Noble Tuber (1918)

Common Sense in the Kitchen: Normal Rations in Normal Times (1918)

The Complete Housekeeper by Emily Holt (1917)

Economical Diet and Cookery in Time of Emergency (1917)

Fifty Valuable and Delicious Recipes Made with Corn Meal (1917)

Food Saving and Sharing: Telling how the Older Children of America May Help Save from Famine Their Comrades in Allied Lands Across the Sea (1918)

Food Problems: To Illustrate the Meaning of Food Waste and what May be Accomplished by Economy and Intelligent Substitution (1918)

Hints to Housewives on how to Buy, how to Care for Food: Meats, Drippings and Butter Substitutes, Substitutes for Meat, Fish, Vegetables, Cereals, Bread, how to Use Left-overs, how to Make Soap, Fireless Cooker, Canning Fruits and Vegetables, how to Preserve Eggs (1917)

Household Organization for War Service. “America Expects Every Woman to Do Her Duty.” (1918)

The Liberty Cook Book: A Guide to Good Living Combined with Economy, (1918)

Mrs. Allen’s cook book (1917) by Ida Bailey Allen (Not specifically war-related, but included anyway, because she is one of my favorite cook book authors of all time and it was published shortly before the USA entered the war. See also below, and The Golden Rule Cook Book, higher in the list.)

Our Country’s Call to Service: A Manual of Patriotic Activities Through the Schools (1918)

The physiology of food and economy in diet (1917)

Some Sugar-saving Sweets for Every Day (1917)

Incomplete, more to come over the next week or so…

9 Responses to “Cook Books from WW1”