I’m especially fond of Native American Culture and I thoroughly enjoyed the stories of the American Girl doll Kaya. A few years back Springfield used to make a native american doll named Niya. She is the doll I used as my model for this pattern. If you don’t have a Niya doll, then a Maria (or Sofia) doll will do just fine.

The pattern for Niya’s clothes is my own invention, designed after looking at several patterns for Indian Princess doll costumes. The fabric was purchased on sale at my local fabric store. It took less than 1/2-yard for the dress and overlay. I think the material was intended as an upholstery fabric, but I could be wrong. It’s stiffer than ultra suede, similar to microsuede, only not as expensive as most microsuede I’ve seen. The trim came from AC Moore. It’s a cream colored cotton braid. I accented the front of the cape with small strips of red leather cord topped with a plastic gold bead. It was very challenging to sew through the red leather cord and if I had it to do over again I would choose yarn or even ribbon. Anything that is easier to sew. I only did 3 because it was so hard to get the needle through the red leather cord. The necklace is made from inexpensive glass beads strung on a thin elastic thread. I have a lot of them leftover from kid and craft projects over the years. The hair ornaments are big plastic buttons that were found on sale at Hancock fabrics about 15 years ago. They have lurked in my button tin until I rescued them for this project. I ran a short length of elastic thread through the button shank and then tied it and trimmed the ends. They fit on her braids like any elastic hair band would. The ends of her braids are tied with simple cotton string. Kiyah’s boots are inexpensive Springfield doll boots I bought at a going-out-of-business sale at a craft shop in the late 90’s. I stashed them with my doll stuff until bringing them out for this project. 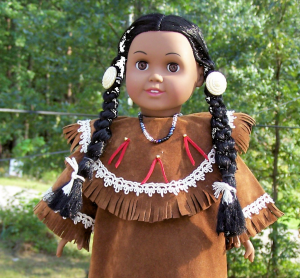 The outfit I designed isn’t associated with any particular tribe. It’s modest and the cape gives it double coverage, which my inner anabaptist finds very pleasing. If you’re making a historical character, this pattern can be made suitable for both Pocahontas and Sacajawea by using different colored fabric and varying the trim. I think an ecru or ivory fabric would be great for Pocahontas.  A darker color would do for Sacajawea since she is traveling. A baby in a papoose would be a fun and historically accurate addition to Sacajawea’s ensemble. Felt is inexpensive and widely available at craft stores in 36-inch square yard packages. It is very easy to work with, especially for beginners. It would work perfectly for this dress.

5 Responses to “Make It Yourself Monday: Niya’s Native American Outfit”