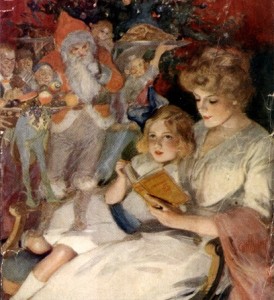 Today, and some last night, I added a new page (upper right of the screen). It’s called Girl’s Books. On that page you will find a collection of Girl’s Serial Books. They are all copyright free and available online.  Most of them from late 19th and early 20th Century.

A notable exception is the Penny Parker Mysteries series from the 1940’s. It’s similar to Nancy Drew, only not quite as predictable.

I may include a separate section of single title books, that are really, really good. I don’t know yet.

Along with the books, I have this grand idea. It’s one of those ideas that’s bigger than I am, but Oh Boy! would it be fun.

The idea started in 1986, when I was 16 and poring over my mother’s copy of the very first American Girl catalog. There were these beautiful dolls, with interesting stories, beautiful, period-correct clothing and accessories, and I wanted Samantha so bad I could hardly stand it. At the time she cost $69 which was pie-in-the-sky as far as I was concerned. There was no way I could ever afford it, and there was no way anyone would buy it for me. I was too old for dolls. Jiminy Cricket! Did I want that doll though.

Ten years later, in 1996, Springfield Dolls came out. They were very affordably priced, and looked convincingly enough like American Girl dolls, that I bought one for myself. Later I bought them for my daughters, and even later, my nieces, cousins and granddaughters. I also bought more for myself. I like them because they are a reasonable compromise between quality and cost. They have all of the play value of more expensive dolls, at 20% of the price (Literally, they are $20 compared to $100 for American Girl dolls).

When I was a girl who still played with dolls, my friends and I would play like our dolls were characters from books. We would play Little Women and Nancy Drew and Little House on the Prairie. When I saw Samantha the first time, and understood that she had books of her own, I was immediately reminded of playing with my dolls like they were characters from books. It made Samantha more interesting to me. Plus her wardrobe was stellar.

My Grand Idea is to look at some of the serial books that are now in the public domain, and develop a how-to for creating your own version of a doll character to match the books. This could be done with any type of doll, from a Barbie to a Springfield doll to something more expensive. There could be a few patterns for people to make their own wardrobes for the character. Maybe a make-over how-to explaining how to make the doll look more like the character including hair styles or new wigs for the doll to look more like the book character. Maybe some craft projects that would correlate with the books. This would allow one to make a customized doll, which is a fun project, and allow one to stay within a one’s budget too.

This idea has been on my mind for many years, and I feel I am at a place right now to give it the time and attention it would need, for at least one doll. In my imagination there would be tutorials and patterns for several different book series. In my imagination other people would fall in love with the idea and want to do it for favorite characters of their own.

The educational potential for a project like this is enormous. You learn reading, comprehension, arts-and-crafts, sewing, self-reliance, the value of creating something yourself instead of buying it from a store.

So anyway, I will probably do this with a single doll eventually, but I am really interested in any thoughts my readers may have on this subject. If you know of someone else who might be interested in weighing in, or contributing to a project like this, then please share this post with them.

I’ve had other mothers talk to me about this idea for Elsie Dinsmore, and Mildred Keith, but they have been done before by Mission City Press and A Life of Faith. Still, if the characters are still that popular, then maybe they are the best choice. I’ve also heard that Anne of Green Gables would be good for this type of project. Laura Ingalls has also been suggested, but her books are not copyright free. Still, her books are widely available and there are the TV shows, which many homeschooling families have on video and allow their children to watch. I personally like Molly Brown or Penny Parker for this type of project. They would be different eras than Elsie and Mildred. Also Peggy Owen, a Quaker during the Revolutionary War, would be a possibility. As would the Outdoor Girls or Ruth Fielding or Grace Harlowe. Any of the Camp Fire Girls series (Vandercook, Stewart, or Frey) might be good because they can be associated with Christian alternative to the Girl Scouts such as American Heritage Girls or Frontier Girls. Plus, what girl doesn’t like playing Camp Fire Girls? I loved to do that as a kid.

So what do you think?

I will pray on it and see what the Lord brings to me. Even for a single character it would be such a large project I have to be sure it’s His will before I start it.