When I started wearing a headcovering, I did a lot of cringing. In public, I looked weird. I wasn’t exactly comfortable with wearing it yet, so it still felt a little bit like a costume, instead of my everyday habit. Since I felt uncomfortable myself, others, especially the public at large, sensed my discomfort and it made things increasingly awkward. Over time things became less awkward. It took time though. I think the first 2 years it was still pretty weird for me at times. After 2 years, wearing the headcovering was closer to second nature. After 5 years it was mostly normal. After 10 years, I don’t even give it a second thought. A headcovering is simply part of my way of life.

During those early months I prayed a lot when I had to go out in public. Grocery shopping, going to church, going to cub scout meetings, took a measure of courage that I didn’t have on my own. I prayed, and God gave me some of his courage, so it got easier. Still, it wasn’t overnight. By 2 months into it, I was doing much better. I was less intimidated by the odd looks and some outright staring. Now it doesn’t bother me when people look at me. And since I’m more secure in my self, and wearing a headcovering, I think my comfort telegraphs itself to others, so they are more comfortable around me too.

There is one bible verse (well, actually two connected verses) that really helped to shore up my courage while I was still feeling peculiar about wearing my headcovering, especially  in public. 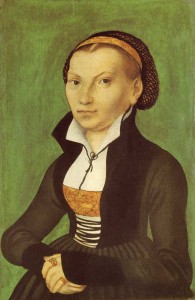 The Geneva bible commentary (1560) say about this verse: “God promises his assistance to his ministers, and that he will give them boldness and constancy in their calling.” I really took this to heart. I asked God to give me a strong face when I was out in public. I needed a strong face and a forehead harder than flint so that the dismayed looks wouldn’t intimidate me or turn me from my calling. I used to chant the above verse to myself when I felt especially overwhelmed and it helped more than I can articulate.

Sometimes doing something that God has called us to do is hard. It’s outside of our comfort zone and we might even feel a little bit crazy for doing it. It’s still worth following his calling for us. Sometimes it seems to me that the things that He asks me to do that are the hardest for me personally, are also the most necessary. The most worthwhile.

So for anyone wearing a headcovering and feeling the cringe that sometimes comes with it, I offer encouragement. My headcovering has brought me more blessings that I can even describe. It’s done so much for my walk with the Lord. It has shown me that I really can rely upon Him and His grace to see me through, moment by moment. Breath by breath.

I started out with wearing bandanas. I made some headcoverings myself, but came back to the bandanas over and over because they were the least “weird” for me to wear in public. I bought some patterns for other types of heacoverings from shaker bonnets to oblong shaped veils that were clipped in place over a bun. Eventually I settled on a snood like the one Mrs. Martin Luther is wearing in the portrait here. I tie a scarf around my head where you see the band on Mrs. Luther’s. It covers the clips I use to hold the snood in place. I buy them from Amazon, or sometimes at beauty supply stores. I prefer black snoods. Sometimes they’re called “heavy weight hair nets.” For me they are the easiest to wear and I feel the most normal in them. Plus I like wearing different scarves around the band to match my outfits.

I’ve found that showing some of my hair, near the front of my face, keeps people from thinking I’m in chemotherapy and losing my hair. I’m also careful to wear a cross necklace so that people know I’m Christian, and not Muslim. I live in the deep south and this simple distinction smooths things for me socially, especially in smaller redneck towns. Some of my more mainstream outfits don’t shout Christian as loudly as my plain jumpers do, so seeing the cross gives other people a quick clue that I’m dressed this way for a specific religious reason, which seems to make them more comfortable around me.

Figuring out which type of headcovering was most comfortable for me went a long way to making it easier to wear. I had to try a lot of different alternatives before I settled upon my snood. Giving other people social clues makes things easier too. It gives people a box to categorize me in, which makes it more convenient for them to makes sense of me. And thus easier to be friendly with me. I personally don’t think any “box” really fits any human being, but I admit that my life is easier when other people know which box I fit in, in their understanding of the world.

And now, after 13 years in the trenches, my headcovering is second nature. It’s muscle memory. It’s just one of the many facts about who I am and the woman God is helping me become. No more interesting than my fingernails or my socks. Just a part of me.