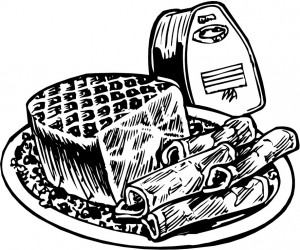 Everyone who stores canned ham needs a good recipe for a classic baked ham. This one glazes the ham with mustard and brown sugar and gives you a pretty, golden-glazed ham as a result. The mustard seems like it would be a predominant flavor, but it merges into the background so you really only taste good ham flavor.

That said, I’ll be the first to admit that canned ham is not what it used to be. It used to be a whole piece of dense, real ham, packed in a can for easy use. It isn’t that way anymore. Now canned ham, even “premium” ham, is chunks of ham pressed together with a bit of ham-mush, all stuck together with gelatin. It tastes like real ham, but the texture is different from what it used to be. Still it’s not the worst thing in the world to eat, and my Fred, who likes every type of canned meat ever invented, loves it like a cat loves a mouse. So I buy it. I prepare it. I eat it. But to be honest (whispers) I like SPAM better. That probably says more about me than it does about canned ham.

I buy DAK canned hams at my local warehouse store. Three packs are pretty affordable. Each can weighs 16-ounces or 1-pound. One of the easiest ways to turn it into real food is to glaze it and bake it until it’s golden brown and nicely canalized. This recipe does just that.

Open the ham and drain any juices into a small baking pan or iron skillet that has been lightly greased. If desired you can score the outside of the ham in a diamond pattern. Just carve into it, about 1/4-inch deep, to make it pretty. You can even poke a few whole cloves into the center of the diamonds if you want to be really fancy. Rub the ham all over with mustard. Then press the brown sugar into the mustard with your hands. You may have to press very firmly to get it all to stick.

Bake the ham at 400° for 20 to 30 minutes. After 15-minutes remove the ham from the oven Use a spoon to scoop the pan drippings from the pan and pour them over the ham. Return the ham to the oven and continue cooking until done. Feel free to baste the ham with the pan drippings several additional times if you like. When the ham is as brown as you want it to be, it is done.

After removing the ham from the oven you may arrange a few pineapple rings attractively on top if desired. An 8-ounce can of pineapple holds 4 rings, perfect for this size ham. Makes 4 servings. Cook 2 hams together if you need to feed more people.

After baking, allow the ham to cool a little bit, to firm up enough to slice. Serve it with mashed sweet potatoes, hot green beans, cold pickled beets and spoon bread. Makes a good meal.