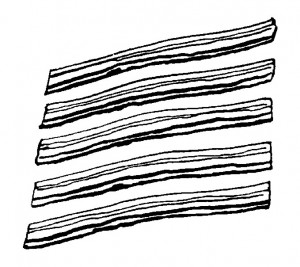 I’m a lazy cook as well as a financially challenged one. I don’t much like to fry bacon or sausage on top of the stove because it tends to make a huge greasy mess and it takes forever to cook enough for the whole family to eat. The cheapest type of bacon you can buy is packed in 3-pound boxes and called Bacon Ends & Pieces. In my experience the flavor is generally quite good. The only problem is that some of the slices are thicker than others and some are mostly fat while other pieces are mostly lean. I have solved all of these problems by giving up frying bacon. Now I only bake it and it always turns out just fine.

Start off with an oven that you preheat to 450°. If your oven runs hot then you may prefer 400°. Next get out a 9 by 13-inch baking pan. Plop in about 8 to 12-ounces of bacon. If some of the pieces are extra thick, then put them on the edges where they’ll cook faster. The thinner slices should go in the center and if they are very thin they can be placed on top of one another for a layered effect. Arrange the bacon slices all lined up next to one another like sardines in a can. Bake the bacon at 450° for about 20-minutes. The bacon should be crisp, nicely browned and swimming in a pool of fat. If your bacon is cut extra thick then it may take as long as 30-minutes to get it crispy enough for good eating.

When you remove the pan from the oven place it on the counter. Wedge a spoon underneath one side of the pan so that the bacon fat can drain down to the low end. Use a fork to rake the bacon up to the high end of the pan, out of the fat pool. This lets it drain without paper towels. After the bacon has cooled enough to handle, serve it to the family with pride.

This method works equally well with pork, turkey or beef bacon. For turkey bacon you have to grease the pan with a little oil before cooking it, because it doesn’t make much fat. Turkey bacon cooks faster than other types of bacon. Check it after 10 minutes, it will probably be done. Beef bacon cooks up just like pork bacon and most people can’t tell the difference. I know my family can’t.

Sausage links or patties can also be cooked this way. Arrange your sausage in the pan and bake it at 450° for about 10-minutes. Use a pancake turner to flip all of the patties or links so they will brown evenly as they bake. Return the pan to the oven and continue baking for 10-more minutes. This method works good with both pork or turkey sausage.

The beauty of this method is that you don’t have to watch the bacon or sausage as it cooks, and you don’t have to clean off the top of the stove afterwards either. You can leave it in the oven and forget about it while you busy yourself with other morning chores like finding lost socks, doggy leashes and your personal dignity. I often shower while the bacon bakes and I haven’t had a batch burn on me yet.

This is also a good way to cook up a lot of bacon or sausage at once to have ready for the rest of the week. 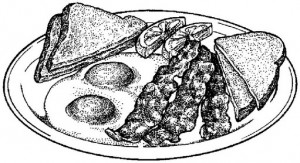