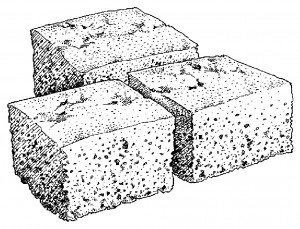 This is a basic recipe for cornbread, but it is also much more than that. As you scroll down the page you’ll see dozens of variations. With this basic recipe you can branch out to make Sweet Cornbread, that tastes much like Jiffy Mix Cornbread. You can make Traditional Southern Skillet Cornbread in an iron skillet with its delectable crispy crust. There is a Light Version of cornbread, which is low in fat and cholesterol. Corn muffins are an easy variation. You can stick with plain or gussy them up with fire roasted red peppers, green chile peppers or whole kernel corn. There’s even a modern version of Cracklin’ Cornbread. Finally, at the bottom of the page, you can learn how to turn this recipe into low fat hushpuppies.

The beauty of cornbread is that you can make a big pan of it for well under $2, under $1.25 with careful shopping. Then serve it to the family and it will fill up all the nooks and crannies in hungry tummies. This lets you go easier on more expensive foods like beef. Or if you are serving a meal of beans or lentils, a hot, fragrant pan of cornbread makes what might seem like budget fare, into a full and satisfying meal. I do not believe you can overestimate the power of hot cornbread to turn a cheap meal into something really special.

This formula for cornbread originally called for buttermilk or sour milk and saleratus, an early form of baking soda, or sodium bicarbonate. I adapted the recipe to use soymilk instead of dairy milk, and baking soda instead of saleratus. The original recipe has been around since right before the Civil War. Pioneers often prepared this recipe on their trek westward. Compared to yeast bread it was quick to prepare. Being made from 100% cornmeal made it inexpensive to boot. It was popular because it was cheap, fast and easy–sounds like our ancestors were after the same things we are.

Preheat the oven to 400°. Coat an 8 or 9-inch, square or round pan with shortening or no-stick spray.

In a mixing bowl combine the cornmeal, salt and baking soda (or baking powder). Use a fork or whisk to stir them up so the salt and soda are evenly distributed throughout the mixture.

In a separate bowl or a large measuring cup, combine the soymilk (or water), vinegar, eggs and oil. Beat with a whisk until well mixed.

Pour the wet ingredients into the bowl of dry ingredients. Mix the batter well. Turn the batter into your prepared pan. Bake for 30 minutes or until lightly browned on top. The edges of the cornbread will be pulled away from the side of the pan and if you poke a fork into the center, it will come out clean.

Cut into wedges and serve hot. Leftovers can be split, lightly buttered and then toasted in the oven or a toaster oven until hot and bubbly. These are very good with soups and hearty bean dishes.

For A Lighter Version use 1/2-cup egg whites instead of 2 whole eggs. Reduce the vegetable oil to 1-tablespoon and add 1/4-cup unsweetened applesauce. In this case you may omit the vinegar, or not as you see fit. Reduce the salt to 1/4-teaspoon if you are watching your sodium.

Prepare the recipe for Cornbread as directed. Add 1/4 to 1/3-cup of sugar or 2 to 4-tablespoons honey to the batter. Proceed as directed.

This makes a very sweet cornbread which some folks prefer. I like savory cornbread. When it’s very sweet it tastes more like cake to me than bread. If you’re accustomed to cornbread made from a mix however, you may find the sweeter version more familiar to you and your family.

Another way to sweeten the cornbread is to replace the soymilk partially, or in full, with apple juice. In this case you may omit the vinegar. 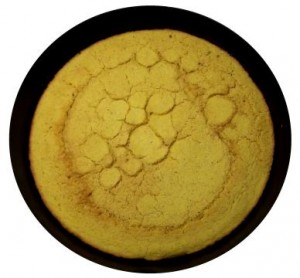 Use the recipe for Cornbread with the following changes. Omit the vegetable oil. Replace it with 1/3-cup of dairy-free margarine. Get out a 10-inch iron skillet. Place the margarine into the skillet and heat it on the stove over medium heat. When the margarine is mostly melted turn off the burner but leave the skillet on the burner until the margarine melts completely.

Meanwhile, prepare your cornbread batter as directed, without the oil. After mixing the batter pour in most of the hot, melted margarine from the skillet. You’ll want to leave a little bit of margarine in the hot skillet, maybe a tablespoon or so. It needn’t be exact.

Beat the hot margarine into the cornbread batter. Then turn the batter into the hot, greasy skillet.

Place the skillet directly into the hot oven. Bake as directed. This method will give you the traditional Southern crust on the bottom and sides of the cornbread, and an extra tender crumb on the inside. This is the cornbread I make most often. When I’m watching my fat intake I reduce the margarine down to 2-tablespoons and use egg substitute instead of whole eggs.

Prepare the recipe for Cornbread as directed. Bake the batter in a muffin tin. Makes 12 muffins.

Prepare the recipe for Cornbread as directed. Add 1/2-cup finely minced onion and 1-tablespoon of sugar. Bake in mini-muffin cups. These taste great and have significantly less fat than deep-fried hushpuppies.