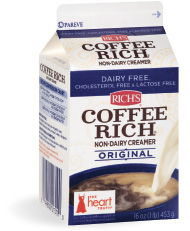 I was recently reading a library book published in 1981, titled The Egg-Free, Milk-Free, Wheat-Free Cookbook by Becky Hamrick. It’s a decent book for egg-free and dairy-free cooking, but a wee-bit lacking for wheat-free cooking. Many of the recipes do call for wheat flour, but lots of them don’t. It’s about 50/50 I guess. Anyway, in the chapter on hints for substitutions she recommends Rich’s Coffee Rich, non-dairy creamer as a good substitute for milk. I’ve heard of Coffee Rich, but I haven’t tried it since I was a very young child. Mrs. Hamrick spoke so highly of it though, that I decided to see if it was still available.

A quick check at Rich’s Website lead me to their “where to buy” option and I found that it’s available at all of my local Kroger stores. It’s in the frozen food section, with the breakfast foods. It comes in either pint or quart cartons, and costs about half as much as Silk Coffee Creamer.

In Mrs. Hamrick’s book and on the product’s website you can find a few tips for substitutions.

It’s important to note that Coffee Rich cannot be whipped like heavy cream, but they do have a dairy free product called Rich Whip, which is like cool-whip, only it’s completely vegan. My local health food store carries it.

Mrs. Hamrick suggested that Coffee Rich was good in soups and sauces, as well as for whitening coffee or tea. I’ve been making white sauce with soymilk or almond milk for many years, and I am the first to admit that it’s just not the same as white sauce made with dairy milk. For this reason we don’t eat half as many creamy casseroles and cream soups as we used to, which is a shame. Cream sauce and cream soups are a great way to make low-cost foods taste good and for using up leftovers.

The idea of having a product that could make good white sauce, while still being 100% dairy-free is pretty appealing to me.

So I headed down to Kroger, bought a couple of the 16-ounce cartons and brought them home. They are frozen, and will keep in the fridge for 3-weeks after thawing. I put one of the cartons in a big bowl of water on the counter for a couple of hours to thaw. You could also use the microwave if you like. Instructions are on the back of the package.

That afternoon I made creamed peas, a simple white sauce to which I added fried onions and a couple of cups of frozen peas. It was really good, far better than creamed peas made with soymilk. The kids ate them over rice and said, “Good Mom.”

Then I made instant mashed potatoes, using diluted Coffee Rich for the milk, and prepared a pot of peppery milk-gravy for supper. I put the gravy over the potatoes, gave it to my husband to taste and he said “Tastes normal, what’s the big deal?” 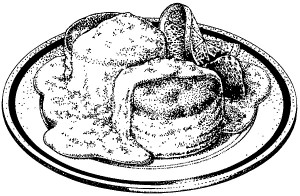 Ingredient wise, Coffee Rich does contain corn syrup and hydrogenated oil. There are also a lot of chemicals that I can’t pronounce or spell. Clearly this is a processed food. It’s a useful and good tasting processed food though, and it’s very affordable while being both gluten and dairy-free. If you’re concerned about heart health, according to the label, Coffee Rich is cholesterol free,  trans-fat free, and carries The Heart Truth  logo of a red dress on the label. I assume this means that The Heart Truth endorses it’s use, although it’s difficult to be sure with the vague wording on the website.

Bottom line, if you have access to Coffee Rich in your grocer’s freezer, then I recommend giving it a try. Diluted half and half with water it works very well in cooking, better than soymilk and almond milk, in my opinion. It’s cost efficient as well. A pint carton cost me $1.29. After diluting, the equivalent of an 8-ounce cup of whole milk costs about 32¢, or about the same as the lowest price soymilk in my area. The equivalent of an 8-ounce cup of 2% milk costs about 22¢. For my money, this is by far the biggest bargain I’m able to find in non-dairy milks.

I’ve tried diluted coffee rich on oatmeal and it’s delicious. It doesn’t have the same nutritional profile as store-bought soymilk, so no calcium and no protein. I wouldn’t use it as the only milk I fed my kids, but I definitely think it has a place in cooking, specifically for recipes that really rely on milk for the flavor of the finished dish.

One thing I really liked about Coffee Rich, besides the economy, was that it does not have an overly sweet flavor. Like evaporated milk or dairy cream, it works just as well in savory dishes as it does in sweet. Most dairy-free creamers taste unduly sweet to my taste-buds. It’s a joy to finally find a product that tastes normal, not too sweet and perfect for cooking. I plan to make it a regular product in my kitchen.

If anyone else uses or tries Coffee Rich, I’d be really interested in reading what you think of it. Even if you hate it, I’d like to know why. 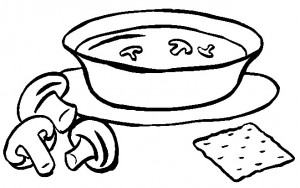