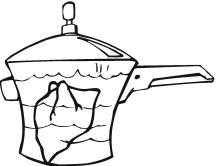 In former centuries this used to be called Second Stock, because it was made by thrifty cooks who were trying to wring the very last bit of goodness from a chicken. It can be made from any leftover chicken bones that you may have laying about. It used to be that after a meal of fried chicken or something of that nature, the homemaker would collect all the bones leftover on the plates and set them aside to boil for second stock. I have had readers tell me that no amount of boiling will render “used” bones fit to eat. I have often made second stock from the bones leftover from a roasted chicken, and have even been known to use bones that have been gnawed on by the family after a meal of baked chicken. I figure I know my family, and our own good health, so I don’t personally have a problem with second stock made from “used” bones from my own family. I would not feel comfortable using “used” bones gnawed on by a stranger. This is one of those areas of frugal cooking where you really have to weigh and measure your own circumstances and your own comfort zone.

How to Boil a Chicken Carcass
Or, Thrifty Homemade Chicken Broth

Place a large mixing bowl in your sink.  Arrange your colander inside the bowl.  Pour the hot broth and bones into the colander  The broth will run through the holes while the bones and debris will lodge in the colander  Lift the colander from the bowl and allow the juices to drip out.  Place the colander on a plate.

Pour the broth (now bone-free) back into the pot.  Put the pot back on the stove.  Boil the stock down until it is about 1-quart or 4 cups.  This is called reducing the stock. A little more or less than a quart really doesn’t matter that much.  The reducing will go fastest if you boil the stock at high or medium-high heat.  The kitchen will get humid so you may want to open up a window or turn on a fan.

While the stock is reducing you need to look over the bones and debris.  Pick out all of the usable pieces of meat.  Depending on how well the chicken was picked over at dinner there may be more meat than you expected.  Place all the little pieces of meat into a plastic bag or small bowl.  Cover and chill until needed. It is excellent in soups.

When the stock has reduced to your preference remove it from the heat.  If desired you may add salt or bouillon cubes to taste.  Usually 1/2 teaspoon of salt or 2 bouillon cubes will be plenty.  You don’t want to get it too salty.  You don’t even have to salt it if you don’t want to. Some people prefer it salted, but some don’t. I used to add salt, but since I’ve been watching our salt intake I don’t any longer. If the stock needs more flavor I will a packet or two of Herb Ox low-sodium broth powder.

Allow the stock to cool slightly and pour it into a wide-mouthed canning jar or any other container with a large opening.  Chill overnight.

In the morning you will see a nice cake of fat sitting on the top of the broth.  Carefully remove the fat.  It can be saved and used in frying and cooking. Chicken fat is high in omega-6 linoleic fatty acids.

Another option is to freeze the broth in 1/2-cup or 1-cup portions.  It can be used anywhere you would normally use canned chicken broth or prepared chicken bouillon.  Another option is to use it along with the chicken you saved yesterday to make a soup.  Several soups on this site are made from a boiled chicken carcass.  It’s a frugal way to get 1 more meal out of that expensive chicken.  Plus, since it’s homemade you know it’s good for you.

The entire process of boiling a chicken carcass is straight forward.  If you’re going to be in the kitchen anyway, like on baking day or when you’re cleaning the kitchen up after dinner, then it’s a small matter to boil and strain the chicken before going to bed.  Another option is to do it in the morning and then by dinner the fat will be hard enough to remove and you can use the broth and meat for a hearty soup for supper.  Think over your daily schedule and make a little time to boil some leftover chicken bones.  You’ll be amazed at the results and never again be tempted by those little hermetically sealed boxes of natural or organic chicken broth that cost a small fortune and seldom taste as good as they promise.  On the frugal front, your broth will be free, which makes those boxes of broth seem even more expensive by comparison.

For 1-cup of chicken broth, all fat removed, no extra salt added.