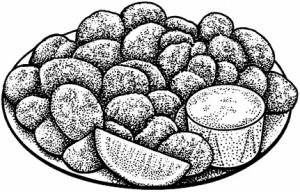 My kids used to live off of chicken nuggets. I bought giant bags of them from Sam’s Club and we ate them at least once a week. I would serve them with toast, green beans, barbecue sauce and instant mashed potatoes or French fries. Then I’d make sure they drank a glass of milk with it to make sure it was a healthy, well-balanced meal. I didn’t realize it at the time, but I was feeding their autistic-craving for wheat and dairy every time I made this meal. I knew the kids loved it and ate it without complaint. If you have picky eaters, you are aware that this is not a fact to be taken lightly. I didn’t understand that I was hurting them every time I served it.

When we gave up gluten and casein I dug out an old recipe for homemade chicken nuggets I had invented when the boys were small. Using a bit of elbow grease and ingenuity I was able to adapt it to fit our needs. Thus Snake Bites were born.

My boys were very picky eaters when they were younger. Now they’re not so bad, but back then–Arrgh! It was like pulling teeth! Giving up their beloved nuggets was a pretty traumatic experience. We began by not eating any nuggets at all for a couple of months. This let them forget exactly what nuggets tasted like. Then, when Snake Bites appeared on the dinner table, the boys were simply thankful to have something vaguely nugget-like. I didn’t tell them that we were eating chicken nuggets.  I told them we were having Snake Bites, so called because they bit back when you ate ’em.  The boys laughed, dunked their Snake Bites in small cups of barbecue sauce and ate them without complaint. They pretended that their hands were snakes, grabbing a piece of chicken, dunking it in the “blood” (barbecue sauce) and dared each other to swallow them whole, like snakes swallow their prey. I had to explain that boys were not snakes and would choke if they swallowed their prey whole, and that they should use their teeth to chew their prey before swallowing it. They argued their point to one another and to me throughout the meal, but they ate it and didn’t complain. Secretly I breathed a sigh of relief. Not only that they ate without complaint, but that they were able to do so without the acting out and fighting that had been a ubiquitious part of mealtimes when they were still on the wheat and dairy. Friendly debate was a huge step up from using forks as weapons of brotherly destruction.

Eventually Snake Bites became the boys’ preferred meal when friends spent the night. It wasn’t too weird and most guests enjoyed it. To this day Snake Bites remain one of sons’ favorite foods.

If I had told my kids that these were chicken nuggets they would have spent hours explaining to me how they are NOT the same as MAC nuggets or frozen nuggets, so I headed them off at the pass and named them Snake Bites instead. In retrospect, this was one of the more clever ideas I had. Not all of my ideas are clever, so I have to appreciate the ones that are.

Snake Bites have a mild, spicy flavor that is just right for a child’s palate. They are good dipped in a sauce or just eaten plain. I also make Snake Bites by cutting chicken breasts into small nuggets and then coating the nuggets in homemade Shaky Bake. They have a little more bite that way, at least in my opinion, and it saves the work of making the coating mix anew every week.

Not all cornflakes are gluten free. I found a store-brand in my area that are sweetened with sugar instead of malt (which is made from barley, a glutinous grain). This is what I use. If I didn’t have these cornflakes available to me I would use Rice or Corn Chex instead.

Begin by preparing the cereal crumbs. I do this in a food processor. I start with 2-cups of cereal, process it to fine crumbs and then dump the crumbs into a measuring cup. Then I process more crumbs, continuing until I have a full cup.

The next step is cutting the chicken into small, bite-sized pieces or longer tenders.  The smaller you make the pieces the further you can extend them with the coating.  After cutting the pieces set them aside.

For the coating you need an empty rice cake bag or a small paper bag or an empty waxed paper cereal bag or something of that nature.  In your bag combine the crumbs, nutritional yeast and seasonings.  The nutritional yeast is completely optional, but gives the nuggets a slightly cheesy flavor that my kids really like. Close the top and shake to combine.

Coat a pizza pan or other baking sheet with the vegetable oil.  Preheat the oven to 450°.

Provide condiments including barbecue sauce, ketchup, honey-mustard, plain honey, mayonnaise, dairy-free ranch dressing or any other favorite.  This is a real kid pleaser.

If your chicken meat is fresh, not previously frozen, then after coating the snake bites you can flash freeze them and store them in a zipper bag in the freezer.  Bake in an oiled pan as directed, increasing the cooking time to 30 minutes or so, depending on the size of your bites.
Flash freezing is when you arrange the food on a waxed paper lined cookie sheet and place the pan in your freezer overnight, or for several hours.  When the snake bites are frozen, gather them up and store them in a heavy plastic bag in the freezer.

The reduction in fat and absence of additives and preservatives makes these a much healthier choice than commercially available nuggets.  Besides that, they taste better, are higher quality and cost less than most store-bought nuggets; and are a fraction of the price of gluten-free store-bought nuggets. I don’t know who can afford those; pound for pound they cost more than shrimp or ribeye steak!

Your Favorite Condiments For Dipping

Prepare the Snake Bites and put them  in the oven. While you’re doing that have the kids set the table. Have the kids get out their favorite condiments such as ketchup or barbecue sauce and place them on the table too. Have a kid make juice from frozen concentrate or Instant Iced Tea or Lemon Water and place it on the table.

When I’m just serving kids, I leave the corn (and broccoli, if I cooked it)  in the pot, because I am too lazy to put it into a serving dish.

This meal takes about 30 to 35 minutes to prepare if I have to get out the food processor. If I have previously-prepared cereal crumbs it goes a lot faster. Kids love to use food processors, but this adds about 10 extra minutes to the prep-time and requires a lot of hands-on supervision.