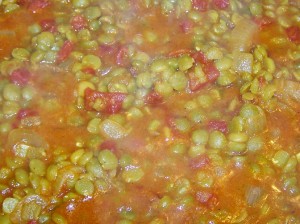 Split Peas and Tomatoes in a Spicy Curry Sauce

I may be in the minority, but I absolutely adore split peas. When I was very young and struggling to make ends meet, I first discovered split peas. A friend gave me a bag because her family wouldn’t eat them. I didn’t remember eating them as a kid, but I was poor and hungry and willing to give almost anything a try. Not really knowing what I was doing, I read the package for ideas. There weren’t any except that they should be boiled for an hour, or until tender. I was pretty clueless about cooking at the time, but I had nothing to lose. I boiled a cup of split peas in water until they disintegrated and then seasoned them with salt, pepper and margarine. While they boiled I sang the old nursery rhyme.

My mushy peas were good, surprisingly good. I investigated them at the supermarket during my next visit and was absolutely shocked at how cheap they were. I bought two bags and felt like I was as rich as Midas.

When I had time, I went through all of my cookbooks and then all of the library’s cookbooks, combing them for recipes that made split peas new and interesting. I tried some really weird and wild recipes. Some of them were delicious. Some, not so much. Still, I found so much security in having a bag of split peas in my pantry, I determined I would always have them in my cupboard and that way I would never go hungry again.

This is one of my favorite split pea recipes. At less than 60¢ per serving, it’s cheap to prepare, but makes split peas seem like something really special. My oldest son, who avoids meat, loves this recipe. My youngest son and husband, both dyed in the wool carnivores, eat it without complaint. Usually they add leftover chicken to theirs. Even when no chicken is available though, they don’t grumble too much when it appears on the menu. That may sound like faint praise, but when you’re feeding vegetarian meals to carnivores, it doesn’t get much better than that. 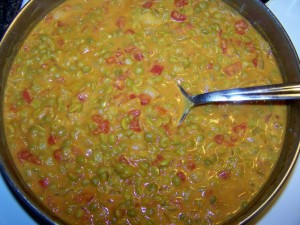 For the Split Peas

For the Curry Sauce

The first thing to do is prepare the peas. Combine the peas, water and vegetable oil. Bring to a boil over high heat. Reduce the heat to medium-low. Simmer for about 30 to 45 minutes or until the peas are tender, but still firm, not mushy. You add the oil to the peas to keep them from boiling over. Split peas tend to foam up a bucket load while they cook. If you add a few drops of oil, or a quick spritz of no-stick spray, you can keep the foaming down to a reasonable level.

When the peas are tender remove them from the heat. If there is still a lot of fluid, you can pour some of it off. If they are merely juicy, and not soupy, then don’t bother.

While the peas are boiling you can prepare the curry. Start by peeling and chopping the onion. Melt the margarine in a large skillet. Add the onion and fry it over medium-high heat for about 5 to 8-minutes or until yellowed and tender. Add the curry powder and red pepper. Fry for a few seconds, to bring out the full flavor of the spices. Add the tomatoes, soy sauce, broth powder, Worcestershire sauce and milk, if you’re using it. You can use any type of milk. I like canned or homemade coconut milk the best, but have used soymilk when coconut milk wasn’t available. I’ve also made it without any milk, and it still tastes pretty good. Bring it to a boil and allow it to simmer for a few minutes. Set aside until the peas are tender.

When the split peas are ready, stir them, along with a little juice, into the tomato-curry sauce. Simmer over medium heat for about 10-minutes. Serve over cooked rice. I serve warmed corn-tortillas with this curry because they’re quick and easy and make a good substitute for Indian Flat Bread such as Chapatis. Stewed apricots may sound insipid, but they are a delicious accompaniment. Makes 4 hearty servings.