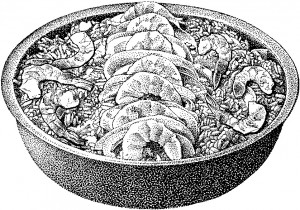 I like this recipe because it’s quick and relatively easy. The hardest part is cutting the chicken into pieces and if you use frozen baby shrimp, then that part is eliminated. Frozen stir-fry vegetables take most of the work out of preparing the veggies, so it’s pretty much just cook and eat.

Frozen baby shrimp, sometimes called salad shrimp, are the cheapest and most affordable shrimp in my area. They are very small, about the size of dry kidney beans. I can find them in large bags in the frozen fish section of my supermarket. They are already peeled, pre-cooked and taste just like more expensive jumbo shrimp. I use them in pretty much any recipe that calls for shrimp. They’re not as easy to dip into cocktail sauce as jumbo shrimp, but they are so much more affordable that I really can’t justify the cost of larger shrimp. When times are tight, we don’t have any shrimp. But during normal rations, baby shrimp are cheap enough that I can serve them regularly. At the time of this writing they are less per pound than most ground beef.

If you don’t have shrimp, then you can use chicken instead. A single large breast is plenty for this recipe.

Heat the oil in a large skillet. If you’re using chicken, then add it to the skillet and fry for about 5-minutes, or until it loses some of it’s pinkness.

Add the onion to the skillet with the chicken (or by itself if you’re using frozen shrimp) and fry it for about 5-minutes, or until it’s tender and the chicken is no longer pink. Add vegetables and water. If you’re using shrimp, then add it now too. Cover the pot and allow the meat and veggies to steam for 5-minutes, or until tender-crisp. Remove the lid. Add the brown sugar and Teriyaki Sauce. Simmer for about 5 more minutes or until the sauce is slightly thickened. Serve over cooked rice. Makes about 4 servings.

Start the rice before you start the stir-fry. Then they will both finish cooking at about the same time.