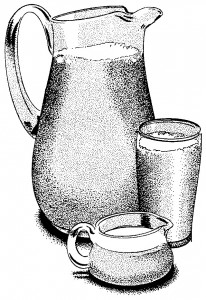 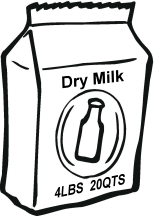 There are two basic types of powdered milk available at the market today. The most common, and usually the most economical is Instant Nonfat Dry Milk. Large, 4-pound boxes are usually the best buy, meaning they have the lowest unit price. This is the price per ounce or per pound. Smaller boxes are available, but they usually cost more per ounce. Nonfat dry milk can be reconstituted (mixed with water) to make the equivalent of fresh skim milk. It’s high in protein, calcium and Vitamin D. It’s nearly cholesterol free and fat-free. Plus it’s low-calorie, with only 80-calories per 1/3-cup dry, or 1-cup of reconstituted milk. 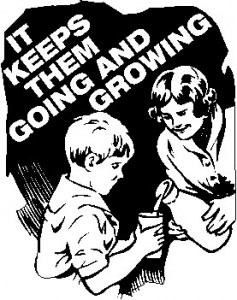 When reconstituting powdered whole milk it’s best to use room temperature or even warm water. This allows the milk to dissolve most readily. Do not use boiling water, which will make it clump up something fierce. Instant nonfat dry milk dissolves readily in a wide range of temperatures from very warm to very cold. It will even dissolve in boiling water if you stir it with a wisk and a snootful of determination. 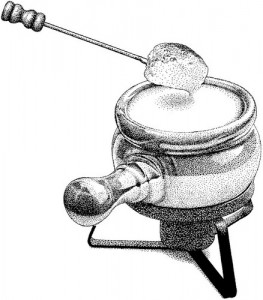 Powdered milk is easy to use in cooking, where the flavor is less noticeable. Over 30-years of cooking, I’ve used reconstituted milk in every type of recipe, from sauces and soups to cake, muffins and even custard. It is impossible to tell that you’re using reconstituted dry milk. Recipe mechanics work the same and the end products are just as tasty as if you used fresh milk. When powdered milk is cheaper than fresh milk, using it in cooking is an easy and painless way to reduce your grocery bill. If you have a small family simply mix up a quart of reconstituted milk and keep it in the fridge. If you have a larger family, mix up 2-quarts or even a gallon at a time. When you’re cooking, simply grab your reconstituted milk and use it instead of fresh milk. Clean, empty mayonnaise jars hold a quart and have wide enough mouths that they’re easy to keep clean. They are convenient for mixing up a single quart at a time.

Drinking powdered milk is a whole ‘nother kettle of fish. Powdered milk has a poor reputation in a lot of circles. There is a stigma attached to powdered milk, that only destitute people drink it. That it tastes bad, that it’s not as nutritious as fresh milk. It seems like only people of low status and poor reputation drink powdered milk. All of this is a bunch of hogwash. 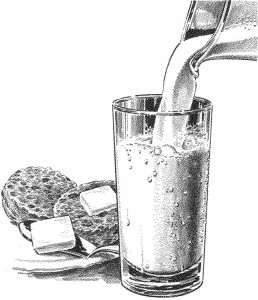 Not a bit of it is true. Still, the reputation persists. The first hurdle you have to surmount is giving yourself permission to put all of those nasty rumors to rest and admit that drinking reconstituted milk is a perfectly good and legitimate thing to do. Drinking powdered milk doesn’t mean that you’re poor, stupid, uneducated or of low status. It simply means that you’re smart enough to know a good thing when you see it, and that you love your family enough to be fiscally responsible. 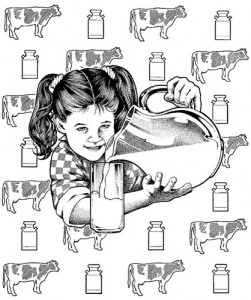 Reconstituted milk tastes best if your box isn’t too old, and if you mix your milk according to package directions. Old powdered milk does not taste as good as a fresh box. If your box of milk has been opened for a year or longer, the milk you make from it probably will not taste as good as milk made from a fresh box. The old box can still be used for cooking, but you owe it to yourself to buy a new box of powdered milk for drinking so the milk you make from it will not taste stale or old. If you don’t follow the reconstituting directions on your package, using more or less milk powder than required, it can give the resulting milk a weird flavor. Mixed correctly and chilled overnight, reconstituted milk has a pleasant, mild, almost sweet flavor.

Remember that most likes and dislikes are a matter of what we’re accustomed to. My children grew up drinking nonfat dry milk and when they had fresh whole milk at friends’ houses, they thought it tasted terrible. I grew up using nonfat powdered milk and drank it almost exclusively for 30 years. I could tolerate fresh skim milk, but even 2% milk tasted weird to me. If reconstituted milk tastes weird to you, then give yourself a little time to become accustomed to it. Work up to it gradually. Use the money you save from using it to motivate you into giving it a sincere and honest try.

For convenience, here is a chart for mixing your own reconstituted nonfat milk.

Dry whole milk is a little different from nonfat dry milk. Here is a handy chart for mixing your own reconstituted whole milk.

The tables above will help you work out the amount of powdered milk needed to prepare specific measurements of liquid milk. Here are some tips to help the milk turn out as fresh tasting as possible. 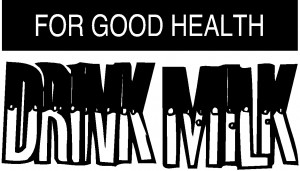