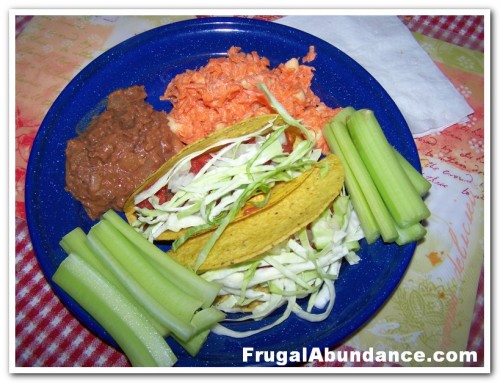 Quick, tasty, cheap, low calorie and filling. Aaah! This is what my dreams are made of. While I created this recipe to be used as a taco filling, it also works on top of taco salad, inside a burrito or as the filling for a mighty tasty chicken quesadilla. As written below it makes about 4 servings. My family loves it so much that I have to make a double batch every time. We have tacos the first night, and quesadillas the next day for lunch.

I use Mrs. Dash Southwestern Chipotle as one of the main flavoring components to this dish. I actually use a lot of chipotle Mrs. Dash in my cooking. It is sodium-free and adds a lot of good flavor to my cooking. Even when I am dirt poor I will buy it because it makes cheap food taste so good. A 2.5-ounce bottle is well under $3 at Walmart.

First peel and chop your onion. Place it into a large skillet with 1-tablespoon of oil. Next remove any fat from your chicken breasts. Toss it out. Use a sharp knife to slice the chicken into thin pieces. Place the chicken in the skillet with the onion. Fry over medium-high heat for 5 or 6-minutes, or until the chicken is lightly browned. It doesn’t have to be cooked through yet. Add the chili powder, soy sauce, lime juice, pepper and Mrs. Dash. Mix well. Continue cooking over medium-high heat until the liquid in the pan is mostly evaporated, but the chicken is still moist. This may take 5-minutes, or it may take 15, depending on how much “broth” your chicken has been “enhanced” with.

When the liquid has mostly evaporated your taco chicken is done.

Nutritional Info for the Entire Batch (no toppings, no shells, just the seasoned meat):

If you are making chicken tacos then divide the chicken evenly between 12-hard taco shells. Arrange the shells in a 9 by 13-inch pan. I wedge them all together so they stand up nicely for filling them. Top each one with 1-tablespoon of shredded vegan cheese. Toast in the oven at 400° for 10 to 15-minutes. You don’t want the tacos to brown too much, but you do want them to toast enough to be extra crunchy.

Remove the tacos from the oven. Top with tomatoes (or salsa) and shredded cabbage. I also like a small spoonful of finely minced fresh onion on mine.