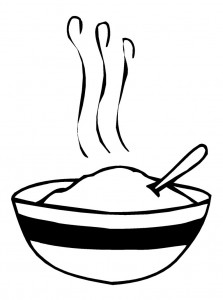 I am Southern. I eat grits. If you don’t eat grits, you can use regular cornmeal instead of grits in this recipe (in most recipes in fact), and get pretty similar results. Grits are so very cheap, plus they’re naturally gluten free. If you’re sticking to a tight budget, whether you’re gluten-free or not, grits and cornmeal deserve a solid spot in the foundation of your diet.

I usually serve Ham Grits for breakfast, although I have also served it for a late night supper when I wasn’t up to cooking anything else. It would make a quick lunch too. This recipe is hearty. It won’t leave you feeling hungry later in the day. It’s cheap too, under 50¢ per serving.

This is an old southern dish that was originally intended as a way to use up the last little bits of ham leftover from Sunday supper before the ham bone went into a pot of beans to give up it’s last goodness to the frugal family. If you don’t have grits then feel free to use cornmeal instead.
You can use any kind of ham in this recipe from salty country ham to turkey ham to thin sliced sandwich ham. Just make sure the ham is in bite sized pieces and it will work fine. I almost always use turkey ham, finely chopped with a sharp knife.

Combine the grits, water, salt (if you’re using it) and onion in a 2-quart saucepan. Bring to a boil over high heat. Reduce the heat to medium-low and let the grits simmer until they are thick.  Add the ham and margarine. Turn the temperature down t very low and continue cooking the grits until they are very thick and almost fluffy. This will take about 10 to 15 minutes from start to finish. Serve in large bowls topped with a little finely chopped onion, and maybe an extra pat of margarine. Makes 4 servings.

When the grits are thick and done cooking stir in 1/2-cup shredded vegan cheddar cheese (Daiya is good). Stir until the cheese is melty and serve to happy children. Makes 4 hearty servings.