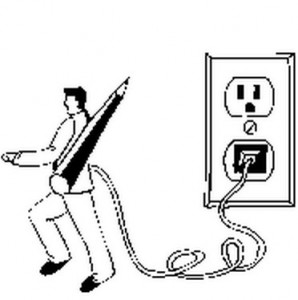 I had big plans to post some old recipes a couple of weeks ago, and they (sadly) did not come to fruition. My laptop, which is just over a year old, stopped charging the way it was supposed to. Sometimes it would charge, sometimes not. It was frustrating. I was worried it was a virus, so I didn’t do much with my computer until I could run all of the anti-virus and anti-spyware software I could find. After getting rid of a few spyware-adware programs, every single one anti-ware programs told me I had a clean system. Still, the lap top would not charge properly. Since the computer is over a year old, the factory warranty is void. I thought about buying a new charging cord, but really didn’t want to spend the money on it. I thought about taking it to the computer shop to see what they could do, but didn’t want to fork over that kind of cash yet. I dithered and dathered.

Finally, it occurred to me that a 30-year old extension cord may not be allowing the laptop to charge properly. I plugged the laptop straight into the electrical outlet and it charged perfectly! Perfectly! I had been pulling my hair out, fighting this thing for weeks! And then, presto! it’s just the extension cord. So I bought a new one, and now things are all working like they should.

I was so upset over this situation. I mean, fuming mad, trying to figure out how to solve my problem. I prayed about it and nothing worked. I was pretty sure that God just wanted me to be without a computer for the rest of my life. Then it turned out to be the most obvious and easy to fix problem it could have been. I bought the best extension cord I could, it cost me $12, and I am absolutely delighted that it was so cheap and so easy to fix. It just goes to show you, the problem you think you have, may not be as insurmountable as it seems. Thank-you God, for fixing my computer so quickly and easily. Amen.

Anyway, now that my computer is working the way it’s supposed to again, I’m getting back on track. Just in case you wanted to know.